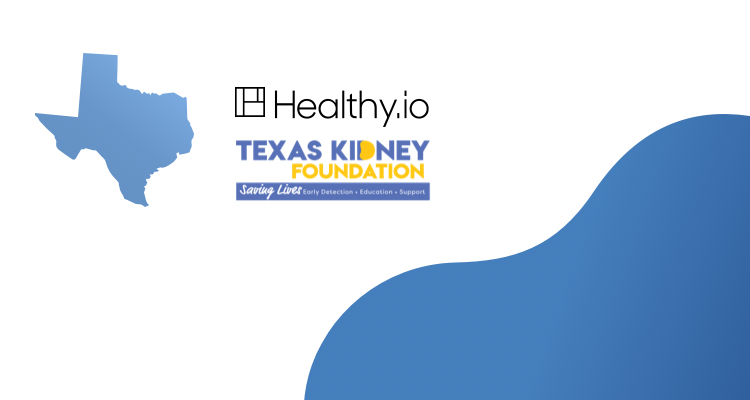 Healthy.io and the Texas Kidney Foundation Join Forces to Battle CKD in the Lone Star State

Our global effort to raise awareness of chronic kidney disease and improve early detection is coming to Texas. Healthy.io launched a new partnership with the Texas Kidney Foundation to bring home albumin-to-creatinine ratio (ACR) urine test kits to the women and men of the Lone Star State.

Chronic kidney disease (CKD) is asymptomatic in its early stages and dangerous in its later stages. The deceptively elusive nature of the disease is what inspired the Texas Kidney Foundation to call its new campaign Silent but Deadly. Texans visiting the campaign website are invited to answer a short quiz to determine whether they are among the one in three adults at risk for CKD. At-risk Texans will be able to receive our Kidney Check test kit to their doorstep, allowing them to screen for CKD from the comfort of home using their smartphone.

Tiffany Jones-Smith has been CEO of the Texas Kidney Foundation since 2017, and was appointed by Governor Greg Abbott to serve on the Texas Chronic Kidney Disease Task Force. We recently sat down with Tiffany to learn more about the campaign, the unique challenges of kidney health in Texas, and what motivates her advocacy. This is an edited and condensed version of our conversation.

You call yourself a kidney crusader. What does that mean?

Tiffany Jones-Smith I describe myself as a kidney crusader because crusaders have a cause and a reason for why they’re doing what they’re doing. It’s more than just a battle—someone who is in it for the long haul. That comes from losing nine family members to chronic kidney disease. I was trying to figure out what happened to my family. I saw a little card for a kidney walk for the Texas Kidney Foundation, and that’s how I ended up getting involved with Texas Kidney Foundation.

The campaign is just getting started. What has the response been like so far?

Tiffany Jones-Smith We put a lot into how the campaign would roll out. We started here in San Antonio, with our mayor and with world-renowned transplant surgeon Francisco Cigarroa. We’ve seen a great response in both the English-speaking community and the Hispanic community. That was an exciting thing because we were expecting to have to work a lot harder to get people to pay attention to their health. After a year of lockdown, people are ready to be out and about, but they are thinking about the quality of their lives, which is what we’re really emphasizing here. This is your lifeline to a healthy life. And then we come in and we literally walk our constituents all the way through and teach them how to eat, what to expect at each stage, what and how we can slow this process down. The first step is identification. You can’t help if you don’t know that it’s there.

What are some of the special challenges for kidney health in Texas?

Tiffany Jones-Smith We have food deserts [areas with limited access to affordable and healthy food] and a number of social determinants of health that play a role in quality of life and influence chronic illnesses like diabetes and hypertension—the two main causes of chronic kidney disease. Southern Texas is one of the hardest-hit areas for chronic kidney disease. That’s why the Texas Kidney Foundation is located where we are [in San Antonio]. We really serve that South Texas region and put a lot of emphasis on it because they are among the poorest and most unaware of kidney disease. We’ve come across people who don’t have shoes so they can’t walk to the appointment. They don’t have a car. So we work with transportation agencies. We have a public health initiative where we’re working with food growers so we can get the right food to people and making sure that the food distributed by food banks is appropriate for kidney patients.

You’re part of the Texas Chronic Kidney Disease Task Force. How do you convince state officials of the importance of kidney health?

Tiffany Jones-Smith Well, I tell state officials that the most important thing we have in our state are the people. You don’t have an economy if the people are sick. There is no state of Texas if there are no Texans. Texas spends 4.8 billion dollars a year on end stage renal disease, the last stage of CKD. That’s 10 percent of the entire end stage renal disease population of the United States. Those are huge numbers. The estimated cost for the earlier stages of kidney disease is 15 billion dollars a year in Texas.

You have the answer to stopping those numbers, to stopping them cold: identify it and begin to treat. That’s it. That’s a simple Texas answer, Texas ingenuity right there. I told them on my last time arguing on the Senate floor a few weeks ago: I will go away as soon as we get rid of kidney disease. So all y’all have to do is just identify it, treat people, get rid of it, and y’all are done with me. But as long as this disease exists, you can count on it, I’m going to be hanging around outside your door, knocking and asking, writing up legislation, championing stuff, because this is going to change.