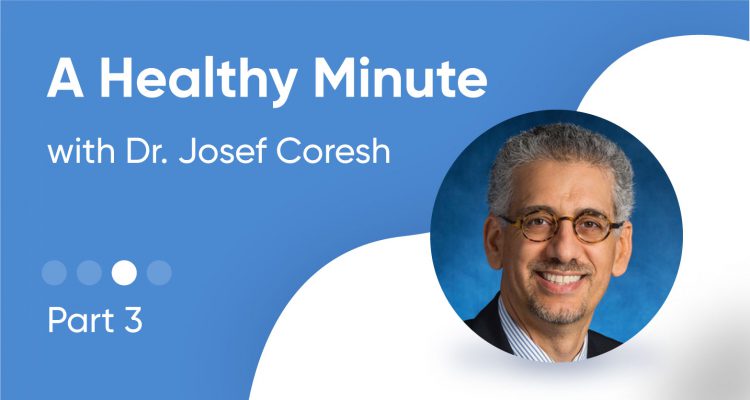 Chronic kidney disease leads to kidney failure when left unchecked, requiring dialysis or transplant. But it is also associated with a host of other corollaries. In a new episode of our Healthy Minute series, Dr. Josef Coresh explains some of the lesser known risks related to CKD.

In this video, the third in a series of four, Dr. Josef Coresh discusses CKD’s corollaries, and their significance for detection and treatment. Stay tuned for the final video next week.

What are the corollaries of chronic kidney disease?

Dr. Coresh: It was really critical, in thinking about chronic kidney disease, to understand that when you look at the full spectrum of the disease from earlier stages to later stages, direct progression to dialysis is really a problem–and losing your kidney function and needing dialysis or transplant is a big problem–but that’s for a relatively few number of people. The vast majority of patients actually have heart disease complications, stroke and other complications where the risk is multiplied by having kidney dysfunction. So we know that the kidney clears toxins from the blood. We know that the kidney regulates the volume of blood you have. And so the kidney disease, when it’s present, then leads to more hypertension, and we know that high blood pressure leads to damage across all the vascular beds. The kidney disease misregulation changes the volume of the blood, and we know that that worsens your risk of heart failure. We know that heart failure is a major killer and a major cost item, and cost for hospitalizations. In addition to that, the kidneys regulate your hematocrit, and we know that anemia aggravates both heart failure and other complications. Anemia is related to a number of other electrolyte issues where the balance may be related to risk of arrhythmia and other complications. So it’s really important and there’s been an evolution to think of the kidneys’ role and the importance of kidney disease and multiplying the risk of a wide range of other things. And then we have to optimize the treatments for kidney disease to lower that risk. That’s been true with ACE inhibitors, which act on the kidney and blood pressure and lower the risk of a number of cardiovascular complications, including treatment of heart failure. And then recently, drugs like the SGLT2 inhibitors really change the transport of sugar in the kidney. So initially that was thought to be good for diabetes, and indeed it is. It lowers the sugar only some, but has a huge effect on reducing the risk of heart failure. So it turns out the connection between the kidney and the heart we always knew was tight and we’re now getting the tools to effectively reduce the risk, which was a challenge until now because people were worried, “what you just find out and don’t anything?” And now we’ve got tools to do something.

Why aren’t people with hypertension being tested for CKD?

Dr. Coresh: The recommendations in hypertension have not been as clear as to the frequency of albuminuria testing. So I think that’s part of the reason the frequency hasn’t been as great. In diabetes risks of dialysis are higher. But in hypertension, the issue is that hypertension is incredibly common. It’s a progressive disease and it has really multiple organ impact, both in terms of the kidney, in terms of the brain for stroke, in terms of the heart for heart failure and heart attacks. Globally, it’s the leading cause of disability adjusted life years in the world. And so the albuminuria marks the highest-risk patients with hypertension and they benefit from specific agents. So I think it’s going to be important to test and there’s going to be increasing clarity, I think, over time in the recommendations. But it’s just been somehow lost in the shuffle too often.